I first played with Luc soon after the tragic early death of Tom Cora at his memorial concert which has recently been released as Madame Luckerniddle.
Luc had been in a very special quartet with Tom called 'Roof' which had my friend Phil Minton and Michael Vatcher in. The three of them invited me to be in a new band appropriately called '4 Walls'. We made two cds which look like this: 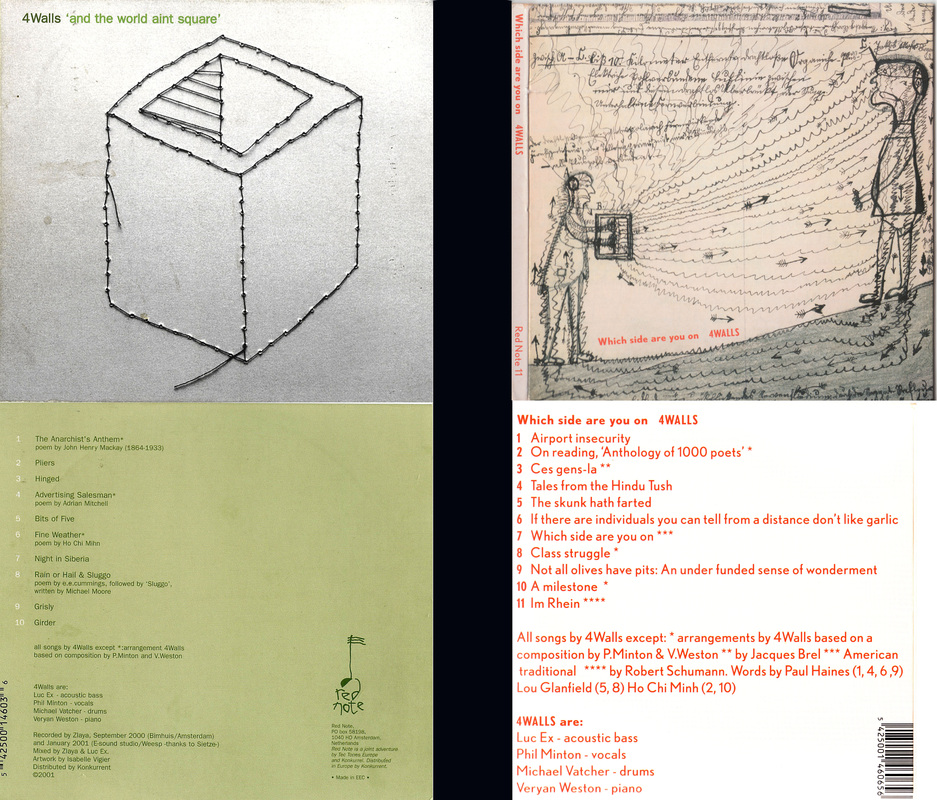 And The World Ain't Square

"4 Walls is Veryan Weston (piano); Phil Minton (voice); Luc Ex (acoustic bass guitar); and Michael Vatcher (drums). The group is descended from Roof, with Weston's piano replacing the late Tom Cora's eloquent cello. And The World Ain't Square is short. The pieces are recordeds direct in one take without overdubs or editing, and the mix is very evn between the instruments and very natural-sounding. Some of the pieces have words and a sort of structure, some seem improvised. All of them show a commitment to improvisation and risk-taking – using riffs and a rock idiom at times, but organic, chaotic, brave. What structure there is acts as a bridge to greater abstraction, notably in the first piece, 'The Anarchist's Anthem', which is a political aestetic and anthem for this music as well – unbashedly, forthrightly anarchic. This and other songs with words are from the repertoire of the Minton/Weston duo, and remind the listener how splendid and radical that duo is, and how extraordinary their musicianship. Phil Minton's first interjection om 'Pliars' is a long sustained chord, the two pitches so seperate so vehement, and equal, that I initially thought there were two people singing. "And The World Ain't Square" is full of such virtuosity, but completely apart from the world of music as a competitive sport. This music takes the long way around to soul; slightly mad, exposed, unfashionably sincere, overtly engaged – and so refreshing, so inspiring and so encouraging to listen to."
(Caroline Kraabel – Resonance Publication)