12 - NOTE CONNECTIONS     EXTENSIONS     TESSELLATIONS     MAKE    EXERCISES
Modulation can refer to the concept of key change. Key changes are used in the European tuning system of equal temperament. A system of tuning a keyboard based on natural harmonics would create dissimilar corresponding scales in different keys, so these pentatonic scales played using equal temperament do not sound quite the same as pentatonic scales heard in various parts of the world on Original instruments which are often built and tuned using the natural overtone series. A Pelog scale played on a piano is only an approximation of a Pelog scale played on a Balinese xylophone. Although some pentatonic scales have existed separately in different cultures for many years, they can be closely related. As well as this, there can also be a symmetry in the way some of these scales relate to one another i.e.through their interval structures. The following pages are about these observations and how they can be used in different ways.

The Common Pentatonic scale is anhemitonic (named because of its lack of a semitone) and can be found worldwide. Perhaps a way of understanding its construction is to see it as a compressed series of 4ths or 5ths e.g.

Squashing these notes into an octave with A at the bottom, it becomes:-

Applying this sequence of steps (2, 1, 1, 2) from the last example to seven different starting notes within the same diatonic scale (in this example - Greek / Aeolian) you get five different kinds of pentatonic scales corresponding to the Greek modes:-

Names of scales are based on similar scales found in the world (Japan, Indonesia, India etc.). Because these scales from other parts of the world also fit into the Greek modes in that each one can be built on a degree of the diatonic scale without alterrations, we can describe them using the term- Primary Pentatonic Scales?.

Note-groups can be thought of as either scales or chords, and being pentatonic, fall naturally under
five fingers, so make good finger exercises for pianists.

Two ways of modulating are possible with pentatonic scales:

1)  Interscalic, where a scale can shift from one type to another.

2)  Sequential, where one type of scale is transposed.


Interscalic modulation, moving through all the Primary Pentatonic scales, can be made using a
magical sequence of single semitone shifts:-

You will notice that each pentatonic scale, when modulating to another, remains in the same position.
The following are the other four positions:-

A system of sequential modulation in 4ths or 5ths is possible using only the Common Pentatonic
scale in different transpositions and again, just single semitone shifts.

If A is thought of as the root note of the first scale as seen above then D would be the root note of
the second scale and so on in ascending 4ths. Therefore each of the above scales modulates up a fourth but using a different position, i.e.

The following is a table that gives the modulations in the cycle of ascending 4ths:- 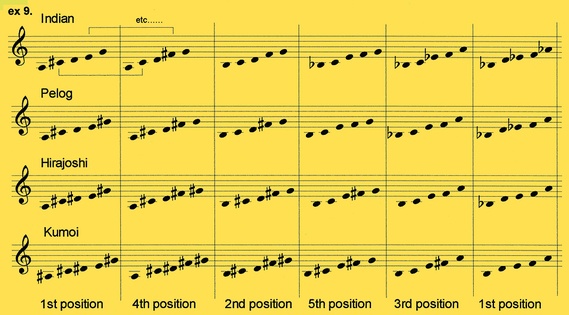 Using just the Common Pentatonic, other sequential modulations can be done by shifting two, three and four pitches up a semitone together and this gives sequences in descending perfect 2nds, ascending minor 3rds and descending major 3rds respectively as follows:-